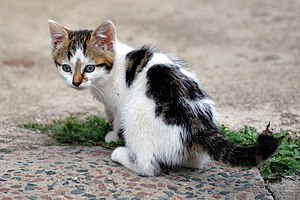 Presentiment and the Story About the Stray Kitten

by Angela Artemis | Oct 22, 2013 | How to recognize intuition, Intuition, Presentiment

Presentiment and the story about the stray kitten comes to Powered by Intuition from subscriber E.C.J.

Presentiment is a form of intuitive sensing or insight.

Our intuition sends us the feeling that something is about to occur or has happened although we do not know what it is. We become anxious but we don’t know why. We experience a feeling of dread for an inexplicable reason. These are all examples of what presentiment feels like.

Presentiment was prevalent just prior to 911

Many people experienced presentiment just prior to 911 and didn’t board their flights. The planes that were used as weapons by the terrorists were unusually empty. There are also stories of workers who didn’t go to work in the World Trade Center that day based on reasons they just couldn’t explain at the time.

Presentiment usually occurs to warn us that something isn’t right. It’s a feeling that we should pay attention to as the following story from E.C.J. illustrates.

I love cats and used to have one. I would love to have another some day but I haven’t done it ’cause I still need to travel some times. And because my neighbour has 2 dachshunds and I fear that if I get a cat it could be killed by the dogs.
.
A few days ago I had a thought that went through my mind.….just a thought and I didn’t pay attention to it, I just let it flow. It was something like: maybe some day I will find a stray cat and I might keep it because it’s time to have another.
.
That thought was last week or so. Then 4 days ago while having breakfast I heard this little kitten crying. I was like “Oh no, I can’t leave him there but I can’t keep it either.” I usually leave them so I don’t get in trouble but I wanted to do the right thing this time. So I went with my impulse of helping the cat.
.
There were two little kittens outside my house. I tried to catch them to give them shelter and food while finding a home for them but, I was able to catch just one. The other one was too quick. I fed the kitten and left him inside while I went to work….
.
During the day, I was growing worried and getting a feeling of “this is not right, I cannot keep him, I can’t take proper care of him and it’s a risk with the dogs, I will need to make some changes in my life etc.,.”. The feeling was getting worse by the minute. By the time I got home the kitten was crying and didn’t let me hold him. I felt bad and sorry for taking him away from his sibling. He could not be consoled.
.
I noticed when I came home from work that night that my back patio garden was destroyed. I presumed it was the neighbour’s dogs that got in ’cause there is a gap in the gate but it looked as if there had been a fight or something. I didn’t pay much attention at the time because the kitten I had in the house was crying so much.
.
At one point, I managed to grab him and he was quiet and still but in the morning (after a night of the kitten crying and me having bad dreams and the feeling of something just not being right growing stronger each minute)….the cat just seemed like he wanted to leave so I left him outside in my front patio with some food and went to work. At night he was hanging around and crying nearby but was still scared, so I left food outside again. That night I felt so bad for taking him away from his sibling that I couldn’t stop crying myself. I felt very sad for the cat.
.
The next day when I came home from work I spoke to my neighbour and found out what happened. The other kitten, the sibling I couldn’t grab in the morning, somehow managed to get into that patio and the dogs went crazy and killed him.
.
So that means that the kitten I had inside heard all the fighting and the attack of his sibling. No wonder he was so scared. Now I feel so guilty for my actions that caused this situation. The kitten killed and the other one alone. I think that what happened was that after I left, the other kitten heard his brother inside the house and somehow tried to get to him and that’s when he fell in my back patio and got killed by the dogs.
.
Now I understand why I was feeling so bad all day. Like a gut feeling that something was terribly wrong. I haven’t heard the kitten for two days now…I’m hoping somebody took it in ’cause I’m still feeling a very bad about all this. 🙁
.
It was my intuition and I knew something was wrong but I didn’t know what to do or what exactly was wrong…..
.

This story is typical of how we experience presentiment.
.
As for you E.C.J. – please don’t continue to feel bad about what happened. You tried to do a very humane thing by taking in the kitten. It wasn’t your fault that the neighbor’s dogs attacked the sibling. If you could have caught the sibling and he hadn’t run away you would have taken him in too.
.
Have you ever had an intuitive experience of presentiment? Tell us about it in the comments.
.
If you found this story helpful share it with a friend on Twitter, Facebook & Google+. Thanks!
.
P.S. Develop your intuition – Start here!
.

Presentiment: When Your Gut Knows Before You Do

Gut feelings are a sense that you know something without knowing how you know.

I feel therefore I know

Have you had that inexplicable feeling that someone was staring at you?

Can you recall how it came over you? How you felt it and knew it at your core before you had any proof? And, when you turned around you found that there was someone staring at you? This is an example of  your gut knowing something before you could confirm it.

Before 9/11 many people recalled feeling anxious, nervous or upset for no apparent reason. It was only after the terrible events of the day began that the nervousness in their guts subsided. This is an example of your gut knowing something  before you do and it has a name: presentiment.

For two weeks prior to 9/11 every time I heard a plane fly overhead it was followed by hearing the sounds of the plane crashing in my mind. I became so upset by this reaction that I thought I was going crazy and had become some morbid and terrible person. It was only after the events of the day unfolded that I realized why I’d been having this reaction.

Seeing before you “see”

Seeing something in the mind’s eye that is too far away for your physical eyes to detect is called clairvoyance. It might be explained by a new study of blind individuals who “see” called “blindsight.”

We are all connected

Random number generators placed around the world are affected at the odds of a billion to one when a large scale global event occurs. At these times, such as on 9/11 or when President Obama was elected, the “randomness” of the numbers is affected. The numbers appearing on the devices stop being so random. This indicates that the high level of emotion created by the world’s population during these events affects the number generators so that they generate a series of similar numbers rather than randomly as they have been programmed to work.

Watch this fascinating video, “Through the Wormhole,” narrated by Morgan Freeman about the nature of consciousness, how our thoughts can be picked up by others through the earth’s magnetic field, how our emotions can alter realty and effect random number generators, blindsight and presentiment. I believe each of us uses our gut knowing or sixth sense much more than we believe or are even aware of.

Dr. Dean Radin’s studies of presentiment are especially interesting. The odds that his subjects are detecting future events a few seconds before they actually occur are so high that he concludes that “something interesting is happening here.”

The video is 43 minutes long  but well worth watching.

What gut feelings or sixth sensory experiences can you recall? Have experienced presentiment and “felt” something was going to happen before you knew what it was?

P.S. To learn more about how you are already using your intuition click here.