Immortality: UC Riverside Gets $5M to Study What Happens After We Die?

by Angela Artemis | Aug 5, 2012 | Consciousness, Does the afterlife exist?

Does immortality exist? What happens after we die? Is it the “end?” Or, does our consciousness survive our physical death?

These are the questions that human beings have been asking for eons.

Tales of people pronounced clinically dead who say they not only witnessed an after life but, knew what was going on around them in the emergency room during the time they were “dead,” are plentiful.

Encounters with love ones who “appear” to the ones they left behind and relay messages such as, “Don’t worry. I’m okay,” abound.

Stories of  mediums relaying private information to the grieving family, only family members would know – are routine occurrences.

How is all of this possible?

Is it real or mass delusion? I’d love to know….

There are a handful of scientists examining the possibility that consciousness survives death but, not many.

The subject is “taboo” in orthodox scientific circles. In some institutions the notion of studying it is akin to career suicide. I have my suspicions that many scientists would love to know the answers to these questions but, hide their interest from colleagues for fear of losing professional credibility, career advancement and even research funding.

The sad thing about the attitude from the scientific community is that it is completely counter-intuitive to what we believe scientific study and exploration is about.  Shouldn’t science have an open mind about exploring new frontiers? Why not allow your colleagues to study this topic without “burning them at the stake?”

The Emperor Has No Clothes

Out of fear of reprisal, the emperor’s subjects agreed that he was wearing clothes – when of course, he wasn’t. The fear instilled in modern day scientists about crossing this line and looking into the study of what happens after death has a majority of scientists agreeing with the “emperor” too.

When Galileo said the astronomers of his day were wrong and that the Earth revolved around the Sun, rather than the other way round, he was pronounced a heretic of the church and spent the rest of his life under house arrest. With the attitude that much of modern day academia has about the study of what happens after death, it doesn’t look as if the scientific community is any more progressive than the Church was 400 years ago.

That is why I was pleased to learn that philosophy professor John Martin Fischer, of the University of California Riverside, received a $5 million dollar grant from the Templeton Foundation to study topics related to immortality such as, near-death experiences and what result the  belief in an life-after-death has on our behavior.

The grant is funding a project titled, “The Immortality Project.” The three year project will focus on scientific studies regarding the questions surrounding the afterlife and immortality.

The Immortality Project will endeavor to answer these questions:

— Whether and in what form a person could survive bodily death.
— Whether the information in our brains could be uploaded into a computer to allow one to exist there in perpetuity.
— How a person’s beliefs about immortality influence their behavior, attitudes, and character.

“One of the main goals I have is just to try and understand more about what we value and what we care about in our own finite lives,” Fischer said. “By studying pictures and conceptualizations of immortality — in religion and in literature and science fiction — we can come to figure out something about the meaning of our own finite lives.”

This is really an exciting time to be alive. Of course, there is the possibility that studies will prove the afterlife is just a beautiful story too. Either way, I’m sure what we learn is going to be fascinating. I’m keeping an open mind.

What are you beliefs about studying immortality? Do you believe it is of benefit to the living to know whether an afterlife exists? How would knowing, one way or the other, impact your life?

If you enjoyed this article please share it with a friend via FB, Twitter or G+. Thanks!

P.S. Learn how to sharpen your intuition. Click here.

Intuition: Where Do “Signs” Come From?

by Angela Artemis | Apr 20, 2012 | Consciousness, How to recognize intuition, Synchronicity

The moment we set the intention to be guided by our intuition is the moment we begin seeing the signs the Universe has been placing on our path all along.

Intuition: Where do signs come from?

Some of you who have read my book, “Navigating by Intuition: How to Follow the Signs” know that I believe becoming aware of the signs that guide us is very important. I’d like to share some readers’ questions about signs:

Question: Why do I get signs that are wrong? END_OF_DOCUMENT_TOKEN_TO_BE_REPLACED

7 Tips to Finding Your Breakthrough Idea

To study intuition is to study the nature of brilliance.

Looking to find your breakthrough idea?

Have you ever wondered how visionaries like Steve Jobs and Bill Gates came up with their breakthrough ideas?

I know I have. Don’t we all look at successful innovators and think, “If only I had come up with that.”

You probably thought that it was part of their nature as “geniuses” to come up with breakthrough ideas and, not in the realm of  “thinking’ for a regular person like you. Right?

If you said, “yes,” you would be dead wrong.

You can think like a genius and you can create the environment to incubate breakthrough ideas like a genius, if you desire it and if you dedicate yourself to it.

To begin popping out breakthrough ideas like a visionary you need a process.You need to understand the nature of breakthroughs, where those brilliant ideas come from, and a system to program your mind to gift you with your own breakthrough ideas. END_OF_DOCUMENT_TOKEN_TO_BE_REPLACED

Live Your Life as Though Everything Were a Miracle

From now on, I’m living my life as though everything were a miracle.

With both eyes afflicted, she could barely see. END_OF_DOCUMENT_TOKEN_TO_BE_REPLACED

“Facing it, always facing it, that’s the way to get through. Face it.”
—Joseph Conrad

A friend and I were talking about an emotional issue that had come up again, after she thought she’d fully healed from it.

Facing a similar emotional issue traumatized her all over again. Had she checked in and used her intuition she might have known that there were still aspects of this issue that she hadn’t yet dealt with. END_OF_DOCUMENT_TOKEN_TO_BE_REPLACED

There is Always Harmony Within 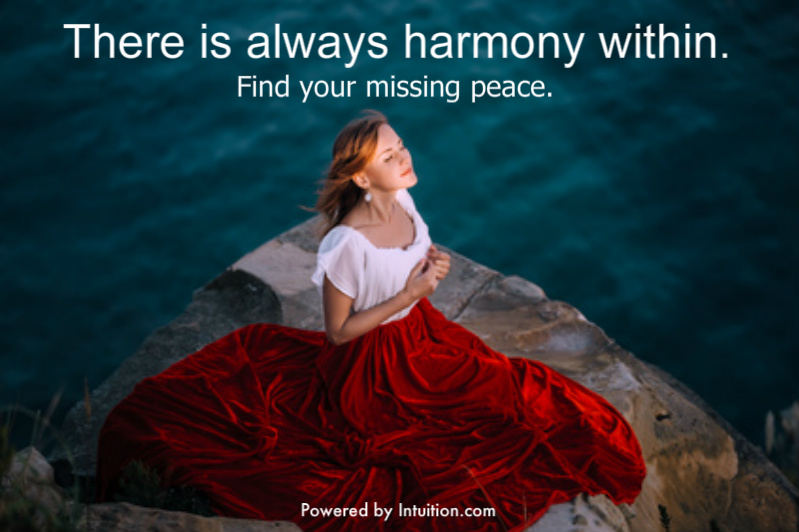 There is always harmony within.

We are one with all life. Our separation is an illusion that is perpetuated by our resistance. Resistance of any kind is the not only the source of the illusion of separation but, the source of disharmony, pain, anxiety, struggle and fear.

At its core life itself (the life force) IS peace and harmony. END_OF_DOCUMENT_TOKEN_TO_BE_REPLACED