Resurrection: Do We Rise Again? (how I came to believe in the resurrection)

If the Resurrection is resurrection from the dead, all hope and freedom are in spite of death. –Paul Ricoeur

Do we rise again? Do you believe in the resurrection? 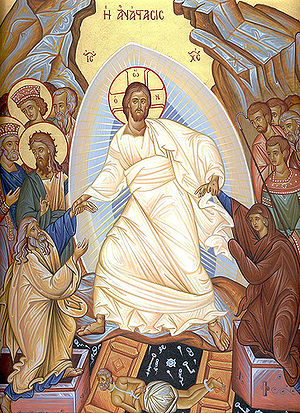 At Easter we retell the the story of the passing of Jesus Christ and how he was resurrected. While the crucifixion is a sad event the miracle of the resurrection of Jesus is a joyous one. The resurrection gives the faithful hope that there is an afterlife where you will be reunited with your loved ones.

What if you’re not sure?

What if you think the story of Jesus being resurrected is just that, “a story?”

I used to think that it was only a story myself.

The Resurrection of Christ is the central event in the liturgical year of the Eastern Orthodox Church and is understood in literal terms as a real historical event. According to Eastern Orthodox tradition, each human being may partake of this immortality, which would have been impossible without the Resurrection; it is the main promise held out by God in the New Testament. (http://religion.wikia.com/wiki/Orthodox_Church)

I spent years going to church with my family on Easter Sunday believing the story of the resurrection was a myth based on mass-hypnosis captured for all eternity in a bible story.

Beliefs and reality are tested

I was sixteen when my uncle passed. That night after his death I awoke a little after 3 am to see him coming towards me. I sat up as he approached and rubbed my eyes to make sure I was really seeing what I was seeing. He bent down and “tweaked” my nose which was his signature way of greeting nieces and nephews. I remember my heart pounding so loud that I could hear it in my head. Then he was gone.

Afterward, I wondered whether I might have been dreaming or hallucinating and stayed awake replaying the event over and over  for a long time before I fell back to sleep. I was afraid that what had happened to me was “wrong” and I thought for sure that it was a sin.

The next morning my uncle’s daughter reported a visitation from her father. When we compared notes we found the visitation had occurred at the same time and in the same exact way. Her nose had been “tweaked” too. I felt much better after comparing notes with my cousin. I began to think of what I had experienced as a miracle but, I still wasn’t convinced about the resurrection.

Even after this event I still maintained that the story of the resurrection was a myth.

In my late twenties a strange thing began to happen to me when I was giving intuitive readings. Every now and then during a reading the vision of a person would suddenly appear in my mind’s eye and after describing the person to my client they would identify them but, state that the person I was seeing was no longer living.

At this time, I never put two and two together. The people I saw would move about and speak to me. It was as if I was watching a scene from  a movie in my head. I assumed I was reading the mind of my client and bringing forth a memory and left it that.

In my thirties, my father’s sister died. Two weeks after her death I woke up at 3 am and saw her standing at the foot of my bed. I looked over at my husband to see if he was seeing her too but, he was fast asleep. I propped myself up on my elbow as my aunt approached. As she neared I was enveloped in a feeling of love that to this day, is beyond words to describe.

My aunt stood next to me, spoke to me and gave me a very personal message which I heard loud and clear in her own voice. I also smelled lavender her signature scent and cigarette smoke. I was overcome by the experience. It affected me profoundly.

My aunt appeared to me one more time after that. I had been asking her to come back again so I could prove to myself that I hadn’t dreamed the whole thing. She came back a week later and said, “We are only separated by a thin veil,” then she was gone. She did continue to visit me in my dreams but, never physically appeared to me again.

After that, I began having even more frequent visions of people’s deceased loved ones during readings. I also began reading books about mediumship and the afterlife. I learned that the term “veil” is used to describe how we the living are separated from our deceased loved ones who have shed their bodies and are now in spirit. I had never heard that terminology before nor, had I ever had any interest in mediumship or the afterlife. Before my aunt appeared to me it all seemed very much of a fairytale to me.

Years after the event of my aunt’s physical manifestation and after countless readings given for clients where loved ones communicate and give concrete evidence of their survival of physical death, I now believe with my whole heart that we do “rise again.”

The resurrection isn’t a myth or fairy tale. We, our spirit, does survive the death of the body. We continue to “live” as consciousness in a non-physical dimension. When we, the living, are open to it our loved ones can and do appear to us just as Jesus appeared to his disciples after his physical death.

Have you ever been visited by a loved one? What happened? Share your story with us.

P.S. You can read more about this topic here.

Fear of Failure: What YOU Can Learn From an Eleven Year Old
Meditation ReAwakens Intuition and Balances Mind, Body & Soul