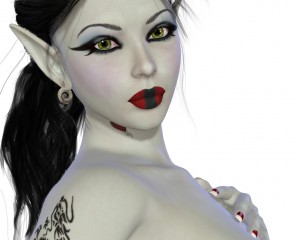 Think of how your skin reacts when you’re afraid; you get goosebumps and the hairs on the back of your neck stand up sometimes even before you’re consciously aware that you have something to be afraid of.

When you become aware of this reaction your conscious mind also becomes aware of the the looming threat to your survival. This is a perfect example of how your body receives and translates information from your environment.

Had the sense of touch not evolved further into the other senses we have, we might still be simple invertebrates floating aimlessly around in the ocean.

Scientists conclude that our current sensory cells are descendents of “primitive ciliated cells.” We recognize them today as the bumps on our tongues and the cells of our skin, ears and nose that often have fine hairs growing from them. Even the cone shape of the retinas in our eyes developed from these ‘bumpy’ cells.

Evolving to the finer senses of sight and hearing required that creatures develop much more complex information processing systems  in order to translate the information received by the eyes and ears.

The ocular nerve had to be able to register the vibrations of light waves.

The ear drum had to pick up the vibrations of sound waves.

Without the ability of our body to be able to sense and interpret vibration we would be incapable of seeing and hearing.

Processing vibrations such as light and sound waves and translating them into useful information was a huge leap in our evolution from life’s original sense of touch.

We are still evolving

While most people identify with the five senses only, there have always been people who were able to detect much more from their environment than what these five senses might account for.

These people were referred to as “sensitives” or “intuitives” or ’empaths’ and even “psychics.”

In last century the numbers of “sensitive” people have been growing.

There has been an explosion in the numbers of people who now declare themselves to be among the “sensitive” population in the last three to four decades though. The increase in those among us who call themselves sensitive may correlate to the birth of the Information Age.

Could it be that we are evolving more rapidly to be better able to adapt to an environment that creates new information at hundreds of times the rate than it was being created when humans first evolved? After all evolution is exactly that – an adaptation to our environment in order to ensure that our species survives.

The fact that more people accept that they receive information about their environment and the people around them through internalizing and translating vibratory data shows that our sensory organs are evolving.

Where are we evolving to next?

We are on the verge of a new age that some are calling “The Intuition Age.” During this new age huge numbers of the population will become aware of their evolved sensing capabilities. Some people are already able to receive information via vibrations emitted by other human beings.

The clairvoyant sense is the ability to ‘see’ things things at a distance that the physical eyes cannot perceive. This is also called ‘remote viewing.’ When I connect with clients by phone I often ‘see’ what they look like and their environment.

Clairaudience is the ability to ‘hear’ things that our physical ears cannot detect. I often hear snippets of sentences and first names when acting as the go between for a client and a loved one who’s passed on.

Clairsentience is the ability to pick up the emotions and physical feelings of others. It is literally being able to sense what another person is sensing.

Claircognizance is the ability to ‘know’ something through means other than receiving information from the five senses.

All of this information is received and understood by sensitive individuals by means of translating the information contained in the energy of the vibrations they come in contact with.

It’s no different from the way the telephone works. When you speak into the receiver your voice is translated into electrical signal that travels to the person you’re speaking with. The electrical pulses come out at the other end and are changed back into sound waves that our ears perceive and convert through the brain into words and sentences we understand. Your voice is not audible on the ‘wire’ it travels on to reach the party you’re speaking to.

This same principle applies to all vibrations that the body interprets as information. You don’t actually ‘see’ light waves yet we know that the eyes receive them and convert them into the physical pictures we call our reality. We don’t see sound waves either, yet they certainly do exist.

Human beings have their own ‘electrical system’ which creates an energy that emits vibratory waves, some call the ‘aura.’ We know for a fact that this ‘electrical system’ exists because when it stops the person’s physical body also ‘stops’ or expires. Those of us who are sensitive can pick up these vibratory transmissions and our body can translate them into information similar to how the other five senses pick up information from our environment.

Science is discovering more each day about how we receive ‘extra-sensory’ information from our environment. I’m convinced that not far off in the future we will one day accept what we now call ‘super-natural abilities’ as perfectly natural responses and adaptations to our ever changing environment.

Wireless transmission of information is the new normal. If you could go back in time 150 years and use a cell phone the people seeing it might call it miraculous or even the work of the devil. We don’t think it’s out of the realm of the ordinary that we have devices that can pick up and translate invisible waves of energy out of thin air into sound, do we?

Perhaps science will learn that our enhanced sensibilities are mirrors of the scientific discoveries we have made in the last century? Maybe all these ‘waves’ that we live among are slowly affecting our physiology and that’s why we have so many people who are sensitive to energy?

Obviously, I don’t have the conclusive answer on any of this but, still, the fact remains that now more than ever huge numbers of people say they are sensitive to receiving vibratory information via their intuition. This must be happening for a reason, perhaps because the human body is evolving to adapt to its changing environment? We shall see. In any case, I’m looking forward to the next 50 years and to seeing what marvelous things we will be capable of.

Are you aware of energy? How does it affect you? Do you feel more ‘tuned-in’ to what other people are feeling? Do you see signs that we are evolving to become more able to receive information intuitively?

If you enjoyed this article please share it on social media. Thank you so much!

P.S. Please don’t forget to subscribe to my newsletter to receive fresh posts right in your in-box, special updates and offers and my free ebook, “The Intuition Primer.

P.P.S – Special offer good through midnight Thursday only! My friends and colleagues Mary Jaksch and Leo Babauta are having another A-List Blogging Boot Camp starting soon. I learned so much from them and attribute my success as a blogger to the A-List Club. If you’re interested in professional training as a blogger – don’t miss this event! Click here to sign up for the upcoming course: A-List Blogging Bootcamp: Skyrocket Your Subscriber Count