Thoughts Are The Building Blocks of Life

Do you know what your thoughts are building? 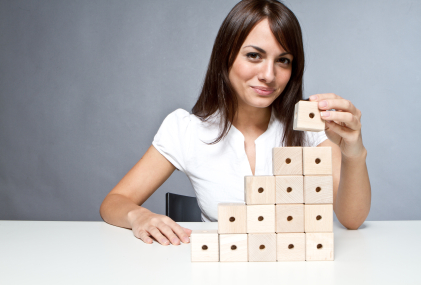 How much attention do you really pay to your thoughts during the day?

Do you allow any and all thoughts to take root in your mind? Or, are you vigilant and disciplined about pulling out the “weeds” before they become impossible to remove?

The only way to know what we are building is to become truly conscious of how we are using our thoughts.

Thoughts are the “form” from which everything in the material world originates. Think of your thoughts as similar to a “mold” that’s used when a plaster form such as a statue or figurine is made.

When you think about something very intently, over and over, you are creating a “thought form.” The energy that you emit is what gives the thought form “life” and makes it manifest in the physical world.

As above so below

Thought forms first appear in the spiritual dimension. When they become strong enough they begin attracting material substance in the physical world where they eventually become the circumstances of our lives. The physical manifestation is a reflection of the thought form that was created in the spiritual realm.

You can never escape the thought forms you have created

This is the law of Karma which means to reap what you sow. Karma isn’t a punishment. It only means that you create what you have dwelt upon, be it for your good or to your detriment.

A thought form takes on a life of its own once you imbue it with enough of your psychic energy. The thought form has the power to affect not only its creator but other people in the life of the person who created it.

This is why we must be watchful of what we’re are thinking. Our thoughts are truly creative. If we are hateful and create those thought forms we will find that we live in a hateful world, while our neighbor who generates positive thoughts, seems to live in a very different world.

The best way to neutralize thought forms is to learn to go within by committing to a daily practice of meditation. When we meditate we learn to get quiet and observe our thoughts.

By observing our thoughts we will see what pattern of thoughts we’ve been dwelling on and can release them before they take root in our lives. Releasing thoughts is different from resisting thoughts. Releasing is detaching and letting go – resistance is holding on.

Forgiveness is very powerful for neutralizing thought forms. One of the best affirmations I ever learned was through Sahaja Yoga: I forgive everyone, including myself. The way to use this affirmation is to focus on the sixth chakra while repeating it.

When we cannot forgive we create an enormous thought form that we will have to contend with someday.

To create a new thought form that neutralizes one that exists already go into a deep relaxed state of mind. View the old thought form and what has transpired because of it. Take a chalkboard eraser and “erase” the old thought form. If it springs back up afterward erase it again. Keep erasing until you stop seeing the effects of it in your mind.

Next, create a new thought form that is positive. Become very clear and come up with just one image that symbolizes the new positive outcome and positive feelings you’d like in your life. Focus on this one image very intently.

Send the loving golden white light of the creative Universe to this image. See this golden light going in and around and through this symbol you’ve created.

Do not stop or lose focus for at least 10 minutes – 20 is better. To create effective thought forms you must learn to concentrate your mind power for long periods of time. Do this for 21 days at least once per day – twice is better.

Within this 21 day period you will have successfully neutralized the old thought form. The evidence will show up in the new positive circumstances in your life.

Releasing the habit of judging is not only freeing but, it increases the level of joy in your life. When you stop judging you start enjoying.

We are so much more powerful than we know

As more people awaken to the truth that our thoughts are a powerful creative force – this creative power is getting stronger and faster.

Our thought forms, both negative and positive, will materialize that much faster and our Karma based on the thought forms will also manifest faster as more people become conscious of their creative power.

We are entering a new age where the consciousness of human beings is expanding faster than ever before on a mass scale. The vibration from this mass awakening will entrain others who have not yet awakened causing things to manifest faster, whether they’re ready for it or not.

When we’re not ready it’s like being swept up in the current of a fast moving river where we have no control over where it takes us. This is why it’s so important to learn how to work with thought forms and to be very selective with our thoughts.

I want to leave you with this wonderful quote by an unknown author that embodies the idea of working with thought forms:

What thought forms are you struggling with? Thought forms can be anything from anger to resentment and jealousy. What will you do differently now that you know you can neutralize thought forms?

P.S. Want to know how to tell the difference between your thoughts and intuition? Click here.

Intuition Development is Speeding Up: 5 Steps You Need to Take Now
Intuition and Evolution: Will We Soon Acknowledge More Than 5 Senses?