What’s in The Box? Outcome to A Remote Viewing Experiment

Are you ready to find out: What’s In The Box? 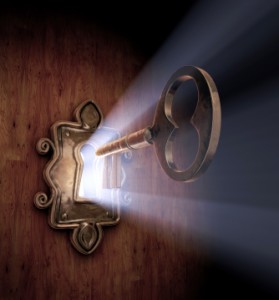 In class I held a box with something in it that I couldn’t see, and I had to come up with impressions for what the object was. To my great surprise the images I received were very significant!

There was so much interest in this exercise that I put together our own experiment for readers of Powered by Intuition titled: What’s in The Box?

I’m now working on a Part 2 article based on the other exercises we did in class using photos – some related to a crime. That should be out later this week so check back.

As for what was in the box: A food scale and a brand new Ped Egg. (Scroll down to see the two photos I took after taking them out of the box this evening.)

As you read through the impressions you’ll notice some of you said: I see, I picture, or I feel, or I got an impression. These are clues as to your dominant way of sensing. Some of you are visual, and others more feeling oriented.

I’m listing the impressions everyone sent me exactly as they worded them. As you read my interpretations see if you come up with any of your own that could apply.

I am picturing a brown box, with a black lining. Inside is a gold heart – This was a brown box – no lining & no gold heart – perhaps the reader was picking up on the “metal” neck that goes down when something is put on the round weighing surface to register the weight? Or, the motion of the scale being pushed down is sort of like the pumping of a “heart?”

I see: baby grand piano, possibly a music box or some type of jewelry object – The front of the food scale is “black” and kind of reminds me of a black key on a piano. You also play “scales” on a piano, so that might be it. The music box impression could come from the round weighing surface of the scale? Or, the Ped Egg opens – maybe that ‘s where the impression of a box came from?

Brooch – I don’t know what kind of brooch it was – was it metal? Was it white and egg shaped. It could be an impression from the Ped Egg, but without more info. I don’t know.
Ring – again more information is needed on this one.
Money – what kind of money? paper, or coins? If coins maybe the metal is related to the weighing surface. Or the roundness comes from perceiving the shape of the Ped Egg.
Cornflakes…(What??) – Might be picking up on the shavings from the Ped Egg!
Ruby – impressions that come to my mind: gem, brilliant, precious, beautiful, & smooth. Maybe this is related to the Ped Egg and making your feet smooth and beautiful? Or, the red indicator on the food scale?
Ribbon – my impressions are – long and narrow, & pliable – not sure…

I see a sort of panorama from a big window, it’s a town perhaps on the sea, inside is dark because of the light from outside, I see a round table with a blanket on it next to the window – The round table may be related to the rounded shape of the weighing surface and, or the Ped Egg shape.

I feel: chocolate brown/ dark brown – the box is brown
scarf – or maybe a scarf like hair band – interesting – another person said a “ribbon.”
photograph – or image – design – there is a logo on the Ped Egg.
magazine – Ped Eggs appear in magazine ads? Maybe you just saw one?
fabric – not sure? Soft, pliable, draping?….the Ped Egg makes your feet soft?

My first impression was something rocky and rough, and that cleared into words (unclear ones) etched into granite.  I stayed with that for a few moments, and then it was like the camera panned back and I saw a rough headstone.  In spite of this seemingly dark image, it felt light and happy.  I heard birds singing, saw blue sky, and felt a breeze.  Then I saw a little white rabbit. – Feet before using the Ped Egg are rough. “Etched” maybe related to the the function of the Ped Egg. Also the numbers on the food scale are silver-toned on  a black background. Maybe this is how you were perceiving the scale? A little white rabbit could be you were picking up on the white Ped Egg.

(Interesting that you saw a rough headstone, but felt light and happy – I am working at my father’s desk (he passed away in Sept. ’09) and strangely enough I found the brand new Ped Egg still in its packaging on one of the shelves of his desk! The box I used contained some of his things which I emptied out to use for the experiment. Maybe hearing the birds chirping and seeing a blue sky and breeze you were picking up that my father is quite happy in his new realm of existence?)

I have to tell you that the first thought that came in to my mind was HAIR! Now where did that come from…maybe it’s a play on the word HARE so could it be a rabbit or something small and furry??? – Interesting we had a “little white rabbit” previously. This may also be related to the Ped Egg?

– a high-heeled red court shoe – perhaps the shape of the shoe is related to the shape of the food scale? I can see how that might translate into a high heeled shoe.
– Daniel Day Lewis’s character in There Will Be Blood. – not sure about this one as I didn’t see the movie. Love to hear your impressions in the comments though after knowing what’s in the box.

I see:
a spatula head with a cornflower blue ribbon tied to it, enmeshed in white tissue paper, a mouse and sunshine – perhaps the spatula head comes from the oval and spoon like shape of the Ped Egg when it’s opened up? The blue ribbon (another ribbon? hmm?) could be related to the blue writing and foot logo on the Ped Egg. Enmeshed in white tissue paper – maybe that’s a play on words – the shaved skin is like “tissue paper?” A mouse could be related to the small rounded shape of the Ped Egg (was it a white mouse?). Sunshine – could be come from relating the round weighing surface to the shape of the Sun?

I imagined your box. I saw a rose, a flame of a candle and some kind of animal face that might be a kitten – a rose has “petals” which could be something like “pushing down on a pedal” when you put something on the food scale? The flame of a candle could be oval shaped like the Ped Egg? A kitten face – I have an adorable photo of a kitten on the wall over the desk where the box was all this time?

I got something curly, wound up like a slinky. Could be a little bamboo plant curled up in a little vase. Could be wire, a small statue sort of thing, lots of curls or curves, not hard angles. Something coiled up, curvy. Reminds me of a little bamboo plant growing in a little vase. I also got a wire sculpture–copper or some other kind of wire looped around to make a figure of some sort. I got a flash of dried bamboo or wood of some sort, narrow, thin, about 1/2 in diameter, sort of dark, like the color of tea, but striated, not all one color. A stick, sort of. But a figure kept popping in with that. This morning I got “Menos.” – I think you picked up on a lot of the shapes being rounded and smooth. Something wound up like a Slinky could be the food scale. I think you were picking up on the tension of the measuring device in the scale. The figure that kept “popping up” could be the way the scale pops up when you remove the weight? I can’t find a Menos in history, but there is the Minos of Greek Mythology. He was the King of Crete. After he died he became the judge in Hades. Maybe because he had to “weigh the souls of the those damned to Hades” he came up as a symbol for you?

A pencil, a safety pin and a small box of matches is what I saw in the box – not sure about the pencil. A safety pin opens and closes in sort of the same way as the neck of the scale going up and down, the Ped Egg opens and all the shavings are thrown out (maybe the matches are like the shavings?).

I could see my boy frd’s picture, bottle of wine, a rolling cub, a cat’s face, merry go round n a waterfall – not sure about your boy friend’s face, or the bottle of wine. A rolling cub and cat’s face could come from that photo on my wall of a kitten. Merry go round could be related to the shape of the weighing surface on the food scale. The waterfall could also be related to the way the scale curves out and down in the front.

The inside of the box was lined with red velvet, very soft and very smooth.  Lying on the velvet was a plain, grey metal crucifix, also very smooth and plain.  It gleamed dully when exposed to the light, much like pewter.  There was no chain.  I also got the feeling that something that should have caused joy caused sorrow instead – the box wasn’t lined. The metal, smooth, plain, pewter like images could come from the scale. I was a bit sad when I found the PedEgg and realized my father must have ordered it through the mail, but never got to open the box.

So what I got when I closed my eyes and didn’t sensor:
First a bracelet, then a gold watch, a clear crystal quartz wand, my crystal manifesting bracelet that I haven’t taken off in months since a reader sent it to me and a sunbeam- ray of light? – it seems like you picked up on the working parts of the scale with the gold watch. 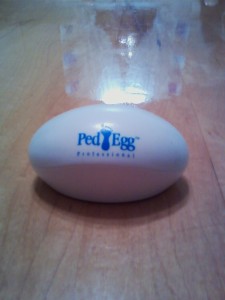 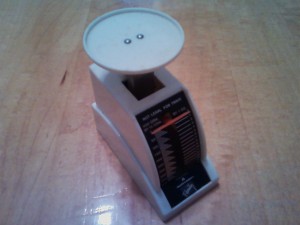 What do you think of this experiment? Was it successful? Now that you know what was in the box can you add any other ways the impressions relate?

Thanks for participating. It was fun!