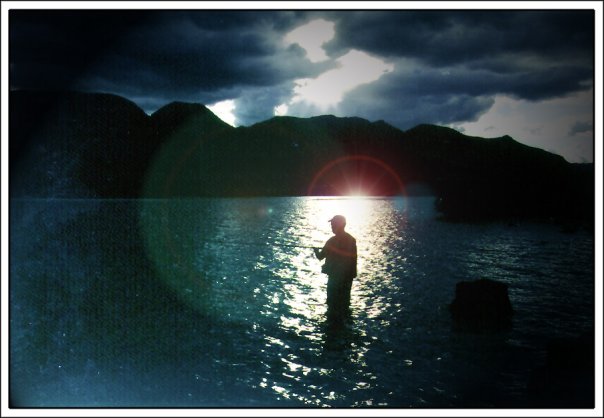 “When our memories outweigh our dreams, we have grown old.”

“An-Angela,” I heard my mother stammer on the other end of the phone.

“What?” Oh no, don’t let it be that, I heard myself thinking.

“Angela, Dad passed away…,” my mother said in a voice barely above a whisper.

“No,” this was just incomprehensible. We’d seen him at the hospital the night before and he seemed so much better.

Racing to pick up my mother soon after that phone call to go to the hospital. Seeing my Dad lying there in the hospital bed looking so still and small. Feeling it couldn’t really be happening. Thinking any moment he’d open is eyes and start talking with us.

These are my memories of what happened one year ago today. The day my Dad passed away. The rest of the year is a blur, but that day is forever etched into my memory.

It’s been a tough year for my family and me, but life does go on – and it should. When we’ve lost someone close to us we think the world is going to stop because of it, but it doesn’t.

I remember going back to work a week later and wanting to scream at the top of my lungs, “My father is gone! Don’t you see how the world is different now?” Of course I didn’t do that. People continue to live their lives and work must go on, but inside you’re acutely aware that something’s changed. The love and security that you took for granted, and which insulated you from fear is gone – stolen in an instant.

Slowly, I began to reassemble my own life. It’s different now for sure, but after falling off the wall I’ve put myself back together again. In January I started my blog, and took to it like a duck to water, finding that writing articles helped me focus on something other than the my sorrow. I realized I was getting back to my old self when my dreams and plans for my life started to excite me again.

Planning how I might make my dreams a reality brought back discussions I’d had with my father. After I bought my house my father used to come by every few days to do handyman jobs, whether I’d asked him to or not. I think he enjoyed getting out of the house and having somewhere to go after he retired.

Having been a mechanical engineer, he could fix just about anything which was a godsend since my house was built in 1927, the same year my father was born. After he did his puttering around I’d always offer him something to eat and make him tea. We’d usually sit at my kitchen counter and talk while we ate our lunch.

That’s when I got to really know my father. We fought a lot when I was growing up, but sitting in my kitchen 20 years later is when our relationship blossomed. The one thing I learned was that my dad still had dreams even though he was in his 80s. There was always something a bit boyish about my father, and most people mistook him for a man much younger than his actual years. I realize now that it was his dreams that kept him young.

Back in 2004, my father had gone to California to visit my brother. They drove to Baja, Mexico and fished, and camped on the beach. On the drive down from LA they had a lot of “misadventures,” such as driving through flash floods, which ended up being some of the most exciting and memorable parts of their trip. Having been a fisherman all his life – this trip was his dream come true. Traveling and seeing new sights, while roughing it and camping with my brother made my father feel really alive, and young.

A few years before my father’s passing, he and I were in my kitchen on a frosty day in December cradling warm mugs of tea when he said, “You know I think I have one more trip left in me.”

At that instant I loved my dad more than ever. I really understood my father’s need to go after his dreams. I also felt a pang of fear in my heart because of the way he said it. It sounded as if he was admitting his life might not go on forever. I’d never thought about having to live without him – but his comment hung in the air like a terrible foreshadowing of a future I didn’t want to face

My sister put it best when she described my dad this way, “He just never knew he was getting older, it never occurred to him, so it didn’t get in the way of him living his life.” He kept on going because inside he still dreamed of that trip with my brother – of one more adventure. 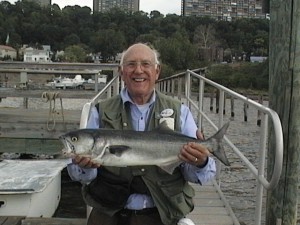 Big catch on the Hudson

And, that’s why we too should strive to keep our dreams alive, and never give up. We need them to nourish our souls, and to lead us forward. Without them – there’s no passion, and not much point to life. As long as you’re still breathing, you’re never too old to have a dream.

I don’t know what my dad is doing now, but I sure hope he’s fishing….

What dreams keep you moving forward? What dream could you not live without?

Change Your Life - Teach What You Most Need to Learn
Do You Know What Your Pet Wants?