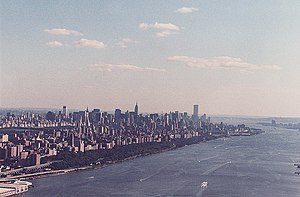 We were walking two by two in the right hand lane of a road. Oddly, there were no cars coming in the other direction. The road was deserted except for the endless stretch of pairs of people ahead of me and behind me. In the distance a huge plume of smoke rose up high into the atmosphere from somewhere in Manhattan. I couldn’t take my eyes off of it. It was eerily familiar.

It was deathly silent too. No one spoke on what appeared to be a lovely Spring afternoon. The police were standing shoulder to shoulder along the side of the road herding us like sheep toward the bridge. Suddenly, the silence was broken by the thunderous sound of military planes overhead. They were huge and flying quite low and they just kept coming and coming. I was terrified. Their numbers seemed to be in the thousands. A policeman seeing the fear on my face reached out and squeezed my hand as I walked by. The woman walking next to me, a childhood friend, reached for my hand and held it tight as we got closer to a bridge.

The bridge was a rusty metal structure. The only way to cross it was to climb up its side like a ladder then swing from the upper bars like a jungle-jim where you’d  then climb down the other side. My friend and I became separated by the throngs of people pushing to get ahead and get over the bridge. Some people couldn’t make it and perished. It was too physically challenging. Only the strong will survive, I thought.

This was the dream I had on February 2nd. I don’t quite know what to make of it. I was thinking it represented a barren business environment and the challenges of overcoming that, but I’m not really sure. I was quite upset by this dream. The plume of smoke reminded me of the plume from World Trade Towers that was visible for several days after they went down.

For three weeks prior to 9/11 every time a plane flew overhead – in my mind I heard a nosedive and then crashing sound. I thought I was losing it and becoming a morbid and horrid person until that Tuesday. Then I understood. Apparently, many many people had premonitions about that day. Now that the CIA has issued a warning about terrorists planning another attack in the next six months – I’m wondering whether I should take this more seriously?

Has anyone else had any weird dreams or premonitions?  If so, please leave a comment.

Resistance is Futile
If You're Serious about Spiritual Growth - Meditate