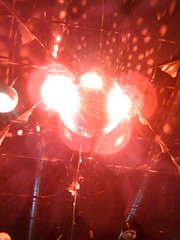 We’re in the midst of a deep freeze in the Northeast with temperatures in the teens at night and only reaching a high around freezing in the daytime. To save on my gas bill I’ve been turning the thermostat way down which has been making it really hard to get up in the morning. After the alarm I stayed in bed to remember my dream (an excuse to remain huddled under two comforters and a fleece blanket a bit longer) but drifted back to sleep instead. When I woke up I’d had a more interesting dream than the one I’d been trying to remember.

In this dream I owned a retail store that was empty. There were rows and rows of glass display cases containing giftware and jewelry. I thought I heard snippets of conversation towards the back and walked over to see if it might be a customer I could help. As I approached I saw that the person speaking was Oprah Winfrey.

Oprah was leaning against one of the counters. She wore a gray wool jumper over a short puffy sleeved blouse with black ribbon woven through the eyelet border. It looked like something a young girl would wear, not a media mogul. Anyway, once I saw her I never noticed who she was speaking to although I knew this person was seated in a chair partially obscured by a tall display shelf. Then she leaned forward toward the person in the chair and began singing.

Then Oprah looked over at me and then turned back to the other person and continued singing – which made me feel very self-conscious about standing there listening to her. I decided I should back away and respect her privacy. As I moved away a hoard of patrons appeared in the store and rushed forward to surround her eager to hear the star singing. I was suddenly the only one not near enough to see or hear her. I felt very disappointed at giving up my ringside seat to this private concert.

The night before I’d asked for a dream to show me if I was on track with my goals. Thinking about the dream, I realized that Oprah was dressed like a girl which made her more approachable. She also didn’t tell me to leave when she was singing to that other person – I made that decision. It also occurred to me that my shop must have had something to offer Oprah or she wouldn’t have been there. So, I believe my dream was saying that I won’t be on track until I learn to value what I have to offer, stop second guessing myself, be more gutsy about promoting myself, and open to accepting opportunities that come my way. I think I have a lot of work to do….

Having Trouble Remembering Your Dreams?
Can Science Measure the Effects of Thought on Physical Reality?